If you’re doing Voice IVR Surveys and you’re response rates aren’t where they are supposed to be, this article is for you.

This time we’ll talk about call retries: why we consider them part of the best practices for IVR Surveys and how they can help you get more people to pick up the phone. If they’re done well.

Voice calls are powerful tools for surveying and here are a few reasons why:

Read more about why voice calls are a highly effective tool for surveying.

There is one hoop though that every voice call must jump through: that moment when the phone is ringing its happy sound and your call is either picked up—or not.

Why is that so important? After all, others will pick up?

It’s about the Funnel

If you’re familiar with sales and marketing, you’ve seen this kind of picture: 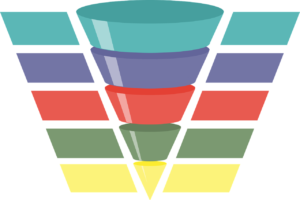 It’s a funnel and the idea is simple: you start out with many phone numbers, adding them to the survey.

Not every number will turn into a completed survey though. With each step of the way, you loose a few.
Maybe a question is difficult or the survey is too long, but you’ll have some people dropping out.

(Read here about how to make your IVR survey better.)

One thing is for certain though: the ones that don’t even pick up the phone most certainly will not complete the survey.

That’s at the beginning of the whole thing—so you need to get as many people as you can to pick up the phone.

How can we do that? And why aren’t they picking up?

Why would they not pick up the phone?

Usually, the reasons are very simple and have nothing to do with your survey (particularly if you are announcing the survey in advance, as we recommend).

In short, they’re busy with their lives: And the result is bad response rates and bad completion rates.

What can you do about it?

Look again at the examples above. Know what most of them have in common? If you try again a couple of minutes later, they might just pick up the phone!

Remember the last time you wanted to ask a friend a question and they didn’t pick up but usually they do? Or the company that you called during the lunch break?
Well, you called them again—because chances are they might answer the phone the second or third time.

Calling again must be automated

Here is the catch: You on your own phone can call your friend again, but it’s really hard to call the 3,000 people that didn’t pick up the phone to answer your voice IVR survey.

So, if you want this to scale, those calls need to happen automatically. Trying one more time needs to be built into your survey platform.

Here is another reason why:

One of the beautiful parts of a survey system is that you can build it ahead of time, schedule it and then check the results later.
This often isn’t good enough if you want to call people again that didn’t pick up.

If you told someone you’d send them a survey around lunchtime, you can’t call them during dinner.

If they opted in to get a survey a minute ago but their signal was bad for a moment, then they expect the callback to happen soon, not the next day.

If someone just stepped into an elevator, then calling again a few minutes later is the time to do it.

So, in short, your survey system must take care of this problem.

We have had automated retries for many years, but these days we’ve made this extremely simple: we call again by default, with sane defaults that we’ve learnt over the years.

For example, in a recent survey we’ve seen the completion rate improve by 25 percentage points—simply by turning on retries.

Want to take advantage of our years of experience making Voice IVR Surveys a success? Sign up now!