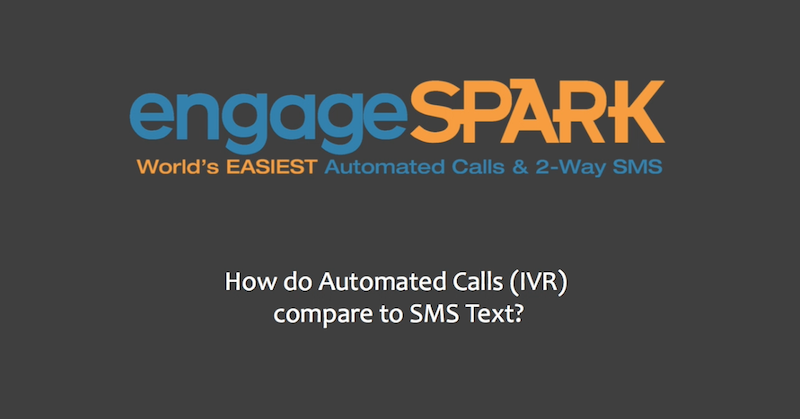 At engageSPARK we’re often asked the question: which is more effective – IVR or SMS? So we decided to write an article comparing the benefits of IVR (or automated phone calls) versus SMS campaigns.

IVR (interactive voice response) is a technology that allows you to interact with people via automated phone calls using prerecorded audio messages – at scale. These interactions can be

The same is true for automated SMS campaigns, except that the messages and replies are sent/received via text messages instead of automated phone calls. So the question is: which one is better for your purposes?

Furthermore, IVR campaigns are more inclusive and broadly representative of responses. This is because illiterate or semi-literate respondents can participate in voice programs, but not so well in SMS surveys.  In other words, the sample size of SMS respondents is narrower, because it’s only selecting for those who are more literate.

IVR campaigns are free for participants

In addition, IVR campaigns are free for participants and there is no Telco hassle.  Automated phone calls are always free for the recipient (outside the U.S. and Canada), whereas with SMS campaigns, the participant has to pay in order to reply by text message. It’s difficult and expensive to get a toll-free SMS short code, which would allow you to circumvent this problem. But with IVR campaigns you can get around it easily and rapidly.

Also, the responses tend to be more honest with IVR campaigns. This is because people are put on the spot to answer immediately when they receive an IVR call while with an SMS they can take their time to send back the “right answer” because they have time to think about it.

The cost per response is typically lower for IVR because of the higher response rate.  If you send out an SMS campaign and get a response rate of 5 percent, that means 95 percent of your SMSs are wasted.  But if you get a 60 percent response rate with IVR, you have only wasted 40 percent of your messages.  While the cost per SMS is often cheaper than for Voice Call minutes, it takes several SMS’s to pack the same content as one Voice minute, so this is misleading. In addition, with IVR you only pay for answered calls, while with SMS you pay regardless of whether the SMS is read by the recipient.

It’s also easier to make an engaging IVR campaign which drives a high response rate. If you use a live voice instead of an SMS, tone, age, and gender can all help to be persuasive and inspire people to react or to engage with your message, rather than just using a dry text message.

And finally: you’ll get more data using IVR campaigns. With automated calls you know exactly who listens, and for how long, what keys they pressed, and why.  You can also segment the calls to include only the ones who listened to the whole message, versus those who dropped off in the middle of it. But with SMS campaigns you don’t have that option – you don’t know who actually read the message. Whether it was delivered doesn’t mean that it was read, and that makes it harder to interpret the results.

How to create a successful Voice IVR Survey?

If you want to learn more about to create a successful Voice IVR Survey check out our IVR guide for NGOs.

How to create a successful SMS Survey?

Still interested in doing SMS? Get a copy of our infographic with best practices for SMS Surveys!