The GSMA has just published a report titled, “Unlocking the Potential:  Women and Mobile Financial Services in Emerging Markets,” which provides a very detailed look into how women are using Mobile Financial Services (MFS) and the challenges and learnings from their study. We will give a quick summary of some of the learnings as well as our perspective on this space.

Overall, the report was very thorough and comprised of almost 4,000 respondents in four countries: Kenya, Pakistan, Papua New Guinea, and Tanzania. Qualitative research was also conducted in the form of 1:1 interviews and focus groups in Indonesia, Kenya, Pakistan, Papua New Guinea, and Tanzania. It is not noted how the quantitative study was conducted; it would be interesting to find out how they were done, for example, whether via SMS or paper.

Image of a woman and her mobile phone by whiteafrican

Mobile financial services such as M-PESA and mobile banking are growing rapidly in emerging markets, with over 150 mobile systems in place and almost as many more planned. Following Safaricom’s wildly successful M-PESA service in Kenya, other markets such as Tanzania and Pakistan are replicating their success. However, one consistently overlooked and extremely valuable target population has been women. There is a noted gender gap in the developing world between male and female ownership of mobile phones of almost 25%. There have also been many studies showing that placing family finances in female hands remarkably improves their economic empowerment, employment opportunities, safety and the overall financial success of the family unit and local economy. Read more about women and mobile phone ownership in this GSMA report.

Not surprisingly, women are already financial advisors and the financial planners of the family. Although men tend to earn above 50% of the income in families from areas that were surveyed, the women were in charge of day to day expenses, paying bills, sending remittances and especially saving for emergencies, something that the men had difficulty with. An anecdote about a women in Pakistan secretly saving money for emergencies like medical bills because her husband had a tendency to spend any savings seemed to represent a typical family.

A woman in Jakarta similarly mentioned that when she asked her husband for extra money in case of emergencies, she was routinely turned down, resulting in her behavior of tucking away extra money secretly. This is clearly an unmet need and something that MFS can help provide a solution for: saving for emergencies. 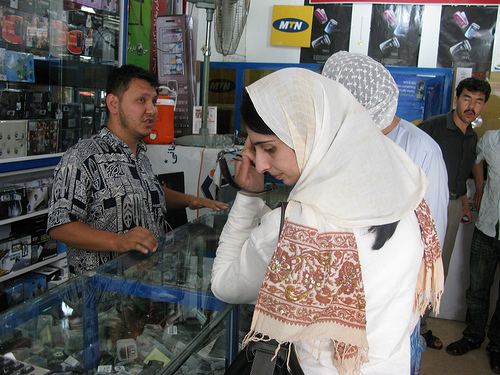 Image of Woman in mobile phone store by Albany Associates

Remittances are a key financial transactions performed by women. Remittances often need to be sent to or received by others and are typically done person to person. Keeping money in the home or traveling with it is a dangerous activity, as violence and theft are a common crime in low income areas. Women stash small amounts of money throughout their house and the ability to transfer money via mobile financial services can remove some of this danger with keeping money lying around the home.

MFS also can remove their need to travel with large sums of money to pay a remittance. Savings groups where people get together to pool their money or store their money at other women’s homes (out of fear of theft from another family member) is also problematic due to a lack of privacy.

Banks in developing countries can be inconvenient or simply out of reach.  In Tanzania, only 74% of surveyed women find banks to be convenient. Due to the time management issues and distance, sometimes banks are simply not an option. Women in this study value four key attributes in financial tools and services: convenience, security, privacy and reliability.  Across markets and consumer segments, MFS offer convenience, security and affordability.

Some of the suggestions that the report makes about how to improve MFS to women include:  better communicate the benefits of MFS over existing services and  invest in below-the-line marketing.  They also suggest demonstrating the ease of using MFS, and its security is also a big part of the promotion of MFS. Fundamental changes such as extending access to more remote locations and improving service quality were also among some of the recommendations.

MFS is a great benefit to women, their families and to the overall economic well-being of a country. As we continue to develop our platform to help NGOs engage with their clients, we need to increase women’s access to mobile phones.  The study found that 34% of women in Tanzania, 13% of women in Kenya and 10% of women in in Papua New Guinea who would like to try MFS cite the lack of a phone as the main reason for not having done so. Expanding mobile phone access for women in developing countries is an important long term goal, something we all need to work towards, given the impact that owning a mobile phone can have on a person and their future success.

Mobile financial services and the results of this report can be a great learning tool for those working on ICT for development projects. Certainly at engageSPARK, we view these learnings as a way to educate our customers to have a better understanding of how to reach their clients.