How Wikipedia Zero is utilising the power of SMS and USSD

SMS is one of the most transformative technologies that we have. At least, it has the power to be. Increasing numbers of people across the world have access to mobile phones, and SMS is a very cheap way to communicate on them.

The amazing versatility of SMS can be seen through the development and implementation of Wikipedia Zero.

What is Wikipedia Zero?

Wikipedia is a free online encyclopaedia containing more than 20 million articles in 280 languages. It is crowd sourced and written by the public worldwide. What Wikipedia Zero offers is the chance to browse these articles for free from your mobile phone.

Wikipedia Zero is an initiative of the Wikimedia Foundation to “enable mobile access, free of data charges, to Wikipedia in developing countries.” The aim of the program is to to take down “barriers to accessing free knowledge.”

Knowledge should be free for all.

Wikipedia Zero is available for all languages (blue) and for some languages (green). Image by Wikimedia.

Wikipedia as a company is very keen on the free distribution of knowledge. It has been pushing for people who do not have access to a computer to be able to access their encyclopedia. It has struck various deals with mobile carriers to deliver free web viewing of its site. This is active in a variety of countries. For example, in Uganda it has a deal with Orange that if people have an Orange SIM and mobile internet enabled they can view Wikipedia for no charge. This is similar to Facebook which was the first online company to make this deal in Uganda. Wikipedia Zero was first launched in India in July 2013.

Now, however, Wikipedia is expanding its reach to those who do not have access to smartphones, but basic phones only. With the help of a Knight News Challenge grant and South Africa’s Praekelt Foundation, Wikipedia Zero is now offering its content through SMS and USSD messages. Users send a text message to get an article in response. No internet connection is needed.

USSD (Unstructured Supplementary Service Data) is a connection based version of SMS popular in developing countries. It is commonly used for navigating through menus to top up mobile credit. USSD is more responsive than SMS because it allows a two-way exchange of data.

USSD does have some limitations. To learn more about the pros and cons of SMS, USSD, and other technologies behind mobile for development read this blog post by David Hutchful.

How will Wikipedia Zero use USSD? 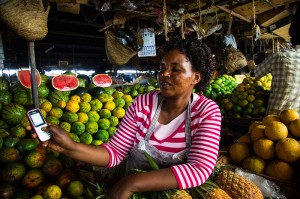 Vumi is an open source mobile messaging platform. It is the platform behind MAMA, which provides essential health information to pregnant women in South Africa.

Wikipedia Zero will use Vumi to allow people to dial a short USSD code which then gives them a multiple choice menu that allows them to search through the encyclopedia. How exactly this will work is a little unclear as an immediate problem presents itself in the average length of wikipedia articles.

Gustav Praekelt, founder of Praekelt Foundation, explains how it will work on the Praekelt blog thus:

Vumi will automatically adapt Wikipedia entries for the text-based interface, making sure the information is as accessible on any handsets, regardless whether it has data capability. It will provide millions of people with access to a basic, text-based version of the Wikipedia service, with further information delivered through subsequent SMS messages. People who ordinarily do not have access to vital information across a diverse range of topics will now have access to the rich Wikipedia content via their mobile phone. This, we believe, has the potential to greatly improve people’s lives.

It is unclear how practical it is to send a whole wikipedia article by SMS. It will be interesting to see how this problem is dealt with.

The use of basic phones

Mobile applications do not have to mean smartphones. Across the developing world, organisations are building SMS and USSD applications that allow anyone with a mobile phone to participate in today’s connected world. With mobile ownership at around 63% across Africa alone and smart phone ownership only a small percentage of this, the real mobile revolution in many parts of the world is happening over traditional basic phones.

At engageSPARK, we’re proud to help NGOs, businesses and other organisations to be part of this mobile revolution.