Last November (2013), Typhoon Haiyan (Yolanda) ravaged the province of Leyte and other nearby parts of the Philippines, killing thousands.  Many more were displaced, lost all of their possessions, and were stricken even further into poverty.

As part of the recovery effort, the international NGO Mercy Corps, along with its partners, implemented a cash transfer and financial literacy program for survivors of Typhoon Haiyan living in Eastern & Western Leyte and Northern Cebu. Mercy Corps used the engageSPARK platform for the financial literacy component of the program – to send out more than 725,000 SMS messages and Voice calls to impart financial literacy messages. 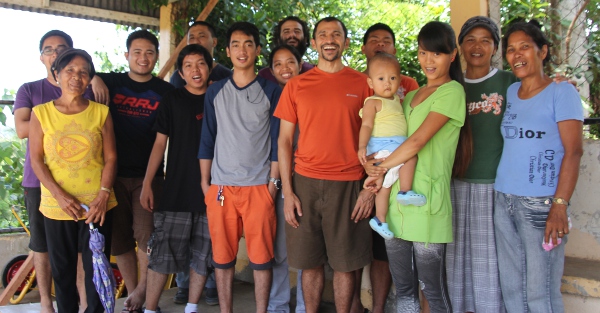 Over a six-week period, Mercy Corps launched SMS and Voice messages to select households who received relief funds through a mobile savings account. The objective of sending out these mobile financial literacy lessons was to help reinforce messages of saving for unplanned exigencies and building resilience for potential future disasters.  Over the six-week period, Mercy Corps was able to send and receive more than 725,000 SMS messages and Voice Calls to approximately 20,000 recipients under the program.

The SMS and Voice messages centered on the fictional story of a Filipino couple named Ben and Joy and their decision-making process when confronted with financial hardships. Recipients were given a scenario in each message and were asked to type in a response to the problem posed at the end of each message. On the Voice Polls, the recipients would press 1 or 2 to record their responses and would then hear a recording telling them whether their response was correct (followed by a cliffhanger to stay tuned for the next call). For the SMS messages, they would reply with 1 or 2. Their responses were then tallied and are currently being evaluated by Mercy Corps.

Our journey to meet with the Mercy Corps beneficiaries started on a ferry to Ormoc City, then a two-hour road trip to Palompon, our gateway to the municipalities of Villaba and Isabel, where the recipients were located.

Since this trip also served as our first team building outing, we spent the first day in Leyte just unwinding and mooching around for a greater part of the afternoon. Everyone was spent from the trip; a few guys chose to take a nap inside their rooms while some lay spread-eagle on the sand by the beach.

Late in the afternoon when everyone was bored listening to the sea waves, we made a makeshift grill and piled on meat for dinner. 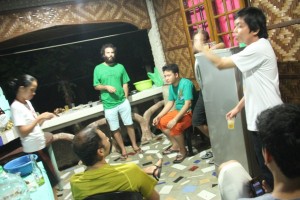 While the meat was getting burnt on the grill, we had our first bonding activity. Each person told his or her “craziest thing you’ve ever done” story to the rest of the team.

Dinner was done the old cowboy way: standing up while eating with bare hands. Afterward, our second activity commenced: “The Story of My Life,” inspired by Acumen’s Storytelling for Change course, which some of our team members had previously participated in. This part went on for a full 3 hours; everyone was open and shared their life story with the rest of the team. All sorts of stories were shared, from notable achievements down to the most embarrassing moments. It was a great bonding experience for the team as we all got to know the person behind the name. It was also a chance to pig out; everyone was stuffing their faces full of meat and chips the entire time.

DAY 2: Of interviews and local lore

In spite of our fun the night before, we somehow managed to get ready and leave by 7:30 AM. We had breakfast at a small eatery in Palompon, then met Mercy Corps’ Western Leyte team before heading out to meet the beneficiaries.

We did not really know what to expect from the meetings as this kind of experience was a first for many of us on the engageSPARK team. I personally thought that we would be doing house visits and a lot of walking, so I was a bit relieved (and disappointed at the same time) to know that the people we were about to meet were all assembled in one place for the interview.

We were able to talk to 10 people from Villaba and 2 from Isabel. Most (68%) of the financial decision makers of the households under the program were women; of the 12 we interviewed, only 1 was male.

Since everyone interviewed said that they liked the lessons they received, we asked them if they were able to apply those lessons from the messages. Sadly, out of the 12, only one answered in the affirmative. The majority said that their income is substantially lower compared to pre-Typhoon Haiyan levels, so they barely have enough to put aside. When they do, it is usually spent within a couple of days for household needs. They also attribute their hardship to the rise in food expenses. Prices went up after Typhoon Haiyan and stayed up even though a year has passed since the typhoon struck.

After listening to their stories and seeing the current state of the province during the entire trip, it made me realize that the PHP 16 billion in Typhoon Haiyan related aid that the Philippines received has only scratched the surface for these communities.

The Journey Back to Cebu

After the last round of interviews, we had lunch and headed back to Ormoc City where we took a ferry back to Cebu City.

Although we were tired from the journey, I thought the whole trip was a success. It definitely reminded me of my college days when we would go from house to house to interview locals and conduct health teachings in depressed communities. That was probably why I was comfortable with all the travelling and doing most of the interviews and translations. I am actually looking forward to doing more visits to recipients in the future, especially to learn if the financial education course had a lasting impact on their behavior.