Why Technology Is the Future of Conflict Prevention

Over the last decade or so the use of ICTs (information, communications and technology – social media, internet and mobile phones) have actively shaped conflicts, as witnessed in Tunisia and Egypt. Citizen engagement, or just passive participation by the virtue of being a recipient of ICT communications, in important socio-political transformations has become more ubiquitous because of access to mobile phones and various kinds of social media. Access to ever-increasing information and data also translates into conflict prevention by enabling institutions to monitor events, evaluate and trigger responses to verifiable crises. This also allows various private and public sector organisations to access real-time information and data through social media and mobile phones.

Daniel Stauffacher, Barbara Weekes and Sanjana Hattotuwa (leading practitioners from the ICT4Peace organisation), in a preliminary discussion paper titled Digital Divide Debates -Understanding the Real Impact of ICTs, Social Media and Crisis Mapping, interestingly point out that peace is often a prerequisite to development and that enormous amounts of progress accomplished during years of peace can be wiped out in just a few weeks of conflict:

Peace is a necessary prerequisite for social and economic development. Throughout the world, many regions experiencing violent conflict are cut off from equitable, sustainable development opportunities. Also, in recent years, we have witnessed decades of excellent development work done by countries and international organisations destroyed through conflict in a matter of weeks. The return on investment in conflict prevention is immeasurably larger than the investments required to reconstruct countries and build peace post-conflict.

The takeaway from this report is that conflict prevention is critical to ensuring that years of progress do not unravel. Today’s post will explore the opportunities and challenges presented by the use of ICTs in conflict prevention and transformation.

While the use of communications technology to incite conflict and propagate messages of hate and destruction are well known, the question that now arises is whether we can use ICTs for peacebuilding and ensuring stability in a post-conflict situation. Practitioners in the field of tech4Peace (technology for peace) are analysing four crucial questions:

In doing so, there is also a need to ensure that technology-based interventions ‘Do No Harm’. Given that access to different kinds of technologies and communications tools is not uniform around the world, we need to take a step back and consider if technology is helping us create more connections than divisions within societies, or vice-versa, or is it doing both simultaneously? More importantly, the question that stares back is, are we putting too many expectations on technology in promoting peace and harmony – are we being realistic?

ICTs are increasingly being used to track progress on the ground, for conflict prevention and resolution, and to maintain stability through peace-keeping efforts. In all these areas, we see the humanitarian aid agencies and government bodies relying more and more on mobile technology, and other interactive tools to tackle potentially hostile situations.

Voters queuing outside a polling booth in Kenya by Stephen W. Wanjau

The world watched earnestly as Kenyans stood in mile-long lines outside polling booths to cast their votes during the recent 2013 presidential elections. The anxiety around the election period was reflective of the unprecedented violence that followed the previous elections in 2007-2008.

Christopher Radler talks about his experience as a security risk manager during the 2013 elections and as part of the Crisis Information Management (CIM) team for Uchaguzi – a platform developed by Ushahidi. The conflict mapping and crowd-sourcing platform was developed ahead of the elections, and it allowed Kenyans with mobile phones, or access to the Internet, to send real-time, on-the-ground election-related information to Uchaguzi through SMS or social media.

The information was then verified by a team of volunteers who assessed the reported information and translated this by geo-locating the received information on the map set-up at Uchaguzi’s website. Recognising the difficulties in verifying each and every incoming report, Radler notes that “though limited in many ways and often of questionable reliability, they (the platform) were allowing us to capture the ambience on the ground and…foresee trends”. 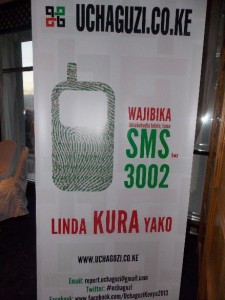 Image of Uchaguzi Flyer by Ushahidi

While violence did happen in Mombasa by the separatist rebel group trying to deter voters, it was limited and did not escalate beyond. Despite both the candidates playing the tribal card, and the fact that questions of vote-rigging were raised, this did not translate into a repeat of the 2007-08 violence.

So what prevented violence despite the many triggers? Not only were Kenyans urged to opt for peace through text messages, but every institution in the country, popular personalities and religious leaders chose to use their influence to promote peace. 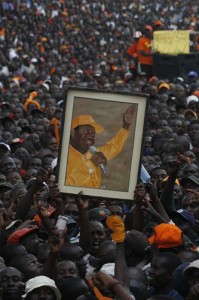 Journalists were also careful in reporting and omitting inflammatory speeches – Raila Odinga’s post-election speech was not aired due to fears that it may incite violence – journalists displayed personal responsibility and patience in covering events and urging people to stay calm. These initiatives by tech experts and civil society did ensure that peace happened. Most importantly their efforts in promoting peace and conflict prevention were collaborative.

Prior to this in 2010, UNDP (United Nations Development Programme) introduced crowd-sourcing for conflict prevention through its Uwiano Platform for Peace whereby citizens could report incidents of violence during the 2010 referendum by sending mobile text messages to a toll free number. A total of 20,000 text messages were received, analysed and verified by a team of volunteers and staff; this information then fed into initial responses from members of the civil society and the police.

While Uchaguzi and Uwiano may be only two of the few examples of crowd-sourcing for conflict prevention and mapping, they give us an insight on how similar platforms/methods can be used to understand local trends and potentially also trigger early responses to mitigate a full-fledged conflict.

This brings us to the earlier questions that trouble the ICT-for-Peace enthusiasts: –

Are we limiting our audience/participants to those only with access to digital tools? In doing so, are we creating a so-called digital divide, where access-to-peace is limited to those with a mobile phone and an internet connection? Or is this less of an issue, as mobile phone penetration (though not Internet access) is reaching almost 100% among adult populations in most developing countries.

Even if everyone had access to these digital tools equally – how do we verify the potential overflow of information and direct conflict prevention responses efficiently and in due time?

Also, how do we create trust in the system? In other words, how do we ensure transparency, and at the same time, anonymity of the participants (as in some cases, the identity of those participating may be in jeopardy, especially in situations where state authorities are part of the problem – see UNDP Issue Brief on Using Technologies for Conflict Prevention.

And lastly, there would be a need to build capacity in how to use the latest ICTs, so how do we ensure that we train people as quickly as we are producing different kinds of communication methodologies?

In the midst of all this, is it too difficult to manage the impending marriage of traditional conflict prevention methodologies with tech-based solutions that require thought and understanding? Put another way, with access to an ever increasing flow of information and the potential to initiate localised conflict prevention responses, are we being realistic in our ambitions with technology? Do share your thoughts with us below and tell us what you think!