Is Your Hiring Process Taking Too Long? 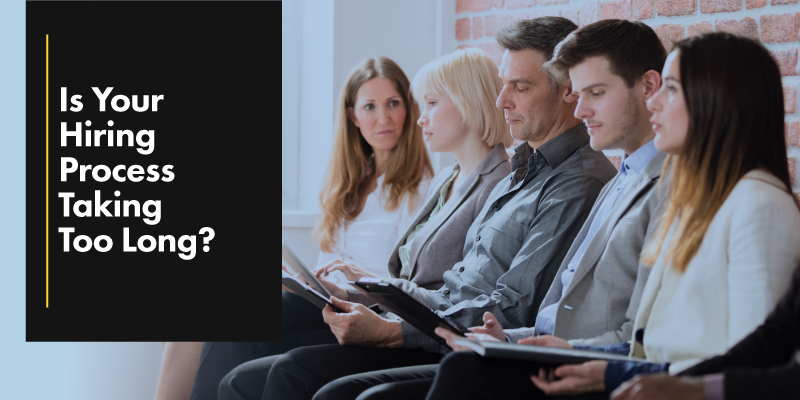 No candidate or recruiter loves a hiring process that drags on. Yet, in 2015, Glassdoor Economic Research reported that the average interview process done by companies across the world could take up to 23 days. The duration could even be longer if you’re recruiting for a big company or a critical job role in a particular industry.

The million-dollar question is: How long should a hiring process take? The key is in managing your hiring process by setting a specific number of days that you could spend on each stage. You also need to be aware of possible causes of delays at each stage of hiring and what you can do about it.

Creating the job ad and posting

Apart from stating the duties and responsibilities that the role entails, your job ad should list what candidates can expect on the job. You could include information about the compensation and benefits package that your company provides to employees, as well as opportunities for career advancement in your organization.

Job posting comes next as soon as your job ad is complete. To reach more candidates with your ad, you could post to different job boards, social media, or your website, among others.

Problem scenario: The job ad has not been reviewed by other team members, the department head, or the HR manager. You don’t want to keep revising or updating your job ad after posting just because some details have been left out.

Workaround: Share with concerned personnel any hiring-related information, files, or documents so that they could check and provide inputs before official rollout.

At this point, applications will start coming in into your inbox. You’ll be receiving tens to hundreds of resumes, cover letters, and portfolios to determine which candidates possess the qualifications you need.

Timetable: One week to one month

Problem scenario: Manually downloading applications and sorting them out can take too much of your time, which you could otherwise use to begin reaching out to your best candidates.

Workaround: Simplify your screening process by using recruitment tools such as an applicant tracking system (ATS). An ATS can be helpful in filtering applications automatically based on keywords, professional background, and other information collected by the ATS.

This is where you reach out to candidates who came on top of your screening process. Phone interviews are your opportunity to educate your candidates about your company further and the job, ask basic skill questions, and determine if the applicant’s expected salary ranges around your offer.

Timetable: Simultaneous with the one week to one month period of receiving and screening applications

Problem scenario: The potential candidate has already accepted work at another company.

Workaround: To avoid losing candidates to competition, contact them immediately once you see signs that a candidate matches the skills or attributes you’re looking for in your future employees. Sourcing your recruitment could give you additional hands to get things done on time.

It’s time to thoroughly assess the candidate’s fit for the role and workplace culture. Thus, you should prepare assessment tests or questions that not only focus on gauging the hard skills, but also the soft skills of the individual.

Problem scenario: It’s the day of the panel interview with the candidate, but one or two of the panelists suddenly had to attend to some duties off-site and could not be present at the interview in person.

Workaround: Utilize video technologies so that the panel interview could proceed even if some interviewers are on official function outside of the office. Plus, you won’t have to inconvenience your candidates by asking them to return the next day.

Your onboarding process should include training your new hires on their job role within the team and in the organization as a whole. They’ll need to be familiarized with the workflow, tools, system, and processes used by the company to be a productive and efficient member of the team.

Timetable: Onboarding is an ongoing process for starting employees. They have to be given enough time to warm up to the team and their new job until they have mastered every aspect of their job.

Problem scenario: This process could make new employees feel the burden of information overload, while their mentors could lose track of what needs to be accomplished over time.

Workaround: Create an onboarding plan or checklist that identifies the different focus areas in more manageable chunks—from HR processes and policies to setting up of tools and equipment, among others.

Job candidates could have anywhere from one to several other applications with different companies, and most of them don’t have the luxury of waiting long to get hired. Thus, it’s important that you speed up your hiring process to attract top talents first.