Meeting the challenge of diversity in tech

The technology industry has a problem. It’s not a new one but one that the importance of which only grows and expands.

This problem is that of diversity in the tech industry.

The tech world is not diverse. The computer industry in particular is a disappointing offender. As a young industry it had an opportunity to engage with a wide range of people in a way that older industries had failed to do for historic reasons. And yet it is predominantly controlled by white, middle class, heterosexual men.

Being diverse isn’t just an issue of gender but also that of sexuality, ethnicity, disability and age, among others.

We live in a diverse world and yet our industries do not reflect this. The tech industry has the potential to alleviate inequality through technology. This is especially promising in the case of mobile technology, as we at engageSPARK have been highlighting in this blog. Mobile technology can help with youth unemployment, help spread knowledge with free encyclopedia access, helping to alleviate poverty, regulate government, and improving agriculture, among many other projects.

Yet the people who control the majority of tech companies are not representative. According to a Human Capital Venture report (a study conducted on VC-backed founders and their race, education and age) 87% of founders are white and 92% are male in Silicon Valley (which dominates the international tech industry).

Part of the challenge is how to get diverse groups a greater involvement in the tech industry. A 2001 study published in the International Journal of Gender, Science and Technology highlighted the technological gender gap in Uganda. Two-thirds of women surveyed said that “society discouraged them by claiming that computer science is a ‘hard’ and ‘difficult’ subject”. 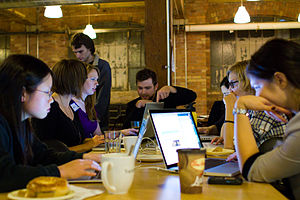 Luckily, this problem of diversity is one that many dedicated and talented people are committed to improving. Typing the words “diversity in tech” into Google reveals many projects and schemes aimed at improving access to the tech world.

Uganda recently gained international positive attention in the blogosphere and twitter. People have been discussing the group Girl Geek Kampala and the programs they run to teach women coding in Uganda. Girl Geek Kampala “promotes and celebrates women in the technology field”. Their mission is “to infuse programming skills and entrepreneurship skills into girls passionate about I.T.

Founded in 2012 by Christine Ampaire, Richard Zulu and Victor Miclovich Girl Geek Kampala is one of many up and coming organisations dedicated to supporting women in pursuit of STEM careers. Well known ones in America include Girls Who Code (New York) and Black Girls Code (San Francisco).

Tristan Walker has initiated an internship program in Silicon Valley to try and address the lack of diversity within them.

This article on Mashable lists 3 reasons why the tech industry of the future will be more diverse: that social media users are more diverse, diverse leaders are emerging in the digital space and organisations are working hard to improve diversity in this space.

Some current efforts to get diversity into tech have been criticised as treating people from marginalised groups as though they are all the same – particularly women.

This problem does not have an easy solution. It is multi-faceted. The first step must be to make the work environment of the tech industry open and appealing. By going into marginalised communities and spreading a joy and enthusiasm for technology, particularly coding, projects and companies help to encourage people who may not have previously considered a career in technology.