Something to Believe in: Tech Startups in the Philippines

The Philippines needs more jobs, and some people are hoping that tech can play a part in the solution.

I was packing relief goods in the Philippines following Typhoon Haiyan (Yolanda) when I first began to realize the extent of the problem. My fellow packers were young men in their early 20s, all college educated engineers, and all unemployed.

The credibility of being a “college educated engineer” has a lot to do with the education system you came out of, and the Philippines’ education system is riddled with defects. And after you graduate, if there aren’t existing business infrastructures or mentors that can guide your path, success is nearly impossible to come by. If you live in the US and you want to be a tech startup guru, what do you do? You move to Silicon Valley, Seattle, or even Austin.

And indeed, Filipinos that can are moving to where the jobs, training, and advancement opportunities are: overseas. Although the numbers are hard to pin down (different government censuses give different numbers), the number of OFWs – Overseas Filipino Workers – is at least 2.2 million and possibly 9.4 million. Consider that the population of the entire Philippines is around 96 million and you begin to realize just how common it is for bright, ambitious Filipinos to leave home (the fact that there is an “official” acronym for it was probably a tip off).

There is an official term for this, too: the “brain drain.”

But a host of determined, benevolent and/or ambitious tech lovers are out to start a revolution. And over the past couple of years, it seems to be gaining momentum. 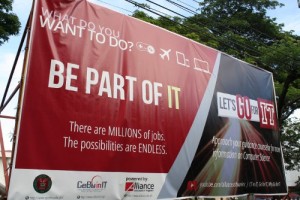 Tech starting up in the Philippines

Early motivators include STAC-SV (hosted the first – now annual – national technology startup pitch competition in 2011) and Phildev (headed by Silicon Valley visionary and home-grown-Filipino Dado Banatao). In 2012, 19 year old Gian Javelona created a national stir by launching a mobile app for his university and then founding a company: OrangeApps.

Currently, groups like TechTalks.ph are trying to bolster the startup community by gathering together existing successes and aspiring geeks. The non-profit is currently helping organize Cebu’s fourth startup weekend, the Philippines’ eleventh!

The environment seems promising. The economy in the Philippines has experienced powerful growth in the last two years: GDP rose 6.8% in 2012 and 7.2% in 2013.

And some foundational elements of the Philippines make it a prime location for international collaboration. The country has a very high percentage of English speakers (nearly anyone you meet in the city is conversational) and is rapidly becoming the “World’s Budget English Teacher.” And because my college anthropology professor would frown on me for using general terms like “East” and “West,” I’ll let the Philippine government’s tourist website say it for me: “The country is marked by a true blend of cultures; truly in the Philippines, East meets West.” Filipinos have a unique cultural and historical perspective that could allow them to be truly international players.

Mobile apps – like Javelona created for Polytechnic University of the Philippines – could be a good place for aspiring entrepreneurs in the Philippines to focus (engageSPARK thinks so!). The Philippines is filled with so many social, communicative individuals that the country, which has long been known as the “Texting Capital of the World,” is now being dubbed the “Social Networking Capital of the World.” Filipinos are also starting to use their smartphones as “mobile computers,” and some are even using virtual phone numbers connected to VoIP, although the vast majority still log in via Wi-Fi instead of purchasing expensive data plans.

There are still myriad hurdles to overcome, but tech loving Filipinos are getting excited.

In the words of Ghandi: “The future depends on what you do today” (Quotereel).