SMS – A Powerful Tool for Change

SMS (also called text messaging) is an immensely and increasingly popular form of communication around the world. It is a great tool for all kinds of mobile campaigns, including mobile healthcare campaigns (mHealth).

In April we wrote about SMS not necessarily being the best medium for mobile campaigns for the majority of poor people. We argued that SMS campaigns tend to exclude individuals in illiterate communities. However, this does not mean that SMS has no benefits. For literate communities and field workers, SMS is a powerful tool.

Who is SMS best for?

There are three main groups of users for whom SMS is arguably the best medium:

The World Literacy Foundation estimated that around 796 million people could not read or write in 2012. With a world population of 6 billion, this means that over 5 million people were literate. Literacy rates are increasing each year due to sustained focus on improving them. It’s estimated that by 2015 less than 15% of the world will be illiterate. This represents a huge number of people – 85% of the world – who are able to engage with SMS campaigns. (Note, though, that many individuals considered literate by these studies are either functionally illiterate or unable to comprehend messages written in non-indigenous languages.)

mHealth campaigns have particularly taken off in the developed world with a specific focus on health-style initiatives. SMS is a perfect medium for this kind of health promotion, as a recent article shows.

For NGOs and aid agencies that want to send information to their workers in the field, SMS is a great solution. These field workers tend to be literate and SMS represents a way of distributing and gathering information that is very useful, as outlined below.

Teenagers and young adults love mobile phones. A recent article by Jocelyne Sambira highlights the increased use of SMS among young people in African countries.  As “youth” (defined by the UN as those between the ages of 15 – 24) already use SMS to communicate with each other, campaigns aimed at them using SMS would have a higher impact.

What are the benefits of SMS?

There are good reasons why so many mobile health campaigns center around SMS.

Sending a text message is practically the cheapest service your phone offers. 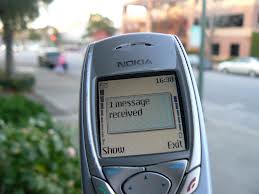 You do not need to have continuous connectivity to receive an SMS. In developing countries where connectivity is not reliable, this is a huge asset. Even if someone’s phone is not connected to the network, the SMS is queued so that they will receive it when they are next connected.[1] This means people do not miss out on the excellent campaign messages you’ve crafted for them.

Similarly, if people are busy, they can read the message later at their own convenience. Working people are often too busy to answer the phone.

As text messages are only 160 characters, your messages will have to be concise and engaging. This presents a challenge to writers of a campaign. But the benefit is that people are less likely to be bored by and stop reading your messages.

People are likely to reply to a text message. It’s quicker to respond to and cheaper than a phonecall. People are even eager to volunteer to help you gather information via SMS. A great example is the highly successful uReport campaign in Uganda, where ordinary citizens subscribe to receive SMS polls and respond to them. People don’t have any incentive to subscribe or respond to the polls, except for wanting to participate in making their voices heard.

Text messages are easy to personalize! It’s much easier to insert someone’s name or other details into a text message than a voice one. People are more likely to engage with and respond to text messages when they’re personalized.

What can you use SMS for?

SMS is a broad medium and the options for campaigns are only limited by your imagination.

SMS has been used for surveys, interactive health quizzes, sharing information (such as to cow farmers), curriculum, and mobile data collection.

SMS campaigns are losing their impact due to too much spam and scams. This means it is important to carefully target your campaigns and to get participants to sign up to them rather than re-using lists of numbers.

As we previously mentioned, SMS excludes the illiterate as well as the visually impaired. Although these people often have access to someone who can read the messages to them, issues of confidentiality arise when the SMS includes or references sensitive information. For example, if an illiterate woman receives messages reminding her to take her HIV medicine, she may not feel comfortable asking someone to read the messages to her.

SMS is a broad-ranging medium with many potential uses. It helps to spread reach around the world in an easy-to-understand and cheap manner. While it has certain downsides, for many groups it still is the best medium for spreading and collecting important information.

[1] Depending on the network, messages may remain in the queue for as long as 7 days.