Running surveys in multiple countries all over the world can be challenging when engaging people from all walks of life who speak different languages. This is where engageSPARK’s multi-language campaigns will come in handy.

What is a multi-language campaign?

As the name suggests, it allows you, the program implementer, to add content in multiple languages to your campaigns. This is so you can push out voice calls and text messages to your program participants in the language that they understand making your campaign more accessible and inclusive.

Currently, you can use this feature in SMS Surveys, IVR Surveys, and Drip Campaigns.

How does it work?

It all depends on whether you know what languages your contacts prefer.  There are generally 3 options, what to do if:

If you already know your participants’ preferred language, you can fill out the Language field in your account’s Contacts page with the language each participant speaks or understands (of course you can do this in bulk by uploading the contacts’ languages). 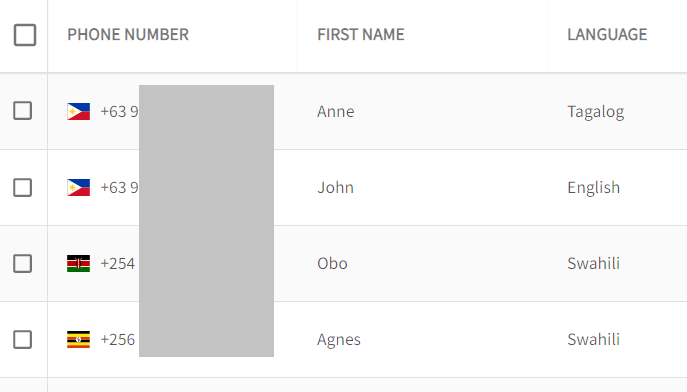 Add Languages to the Campaign

Then, in your campaign, set the languages supported. For this example, this IVR survey campaign supports 3 languages: English, Tagalog, and Swahili.

You will know all languages are set when you see a checkmark right next to all the languages.

You can then follow the same steps for the succeeding questions you have in your IVR survey.

Depending on what language you’ve specified for each of your participants, the engageSPARK system will then automatically ask them the IVR survey questions from your campaign in the language they speak and understand. The same idea applies to when you create an SMS survey or a Drip campaign.  Note that if you don’t add a recording/message for a language, then people assigned that language (or assigned no language) will receive the default language version.

This is how it will look like in the downloadable excel report. The report is updated in real-time as your participants answer your IVR survey or SMS survey questions.

You can also view an overview of the breakdown of survey results in the campaign summary’s online dashboard. 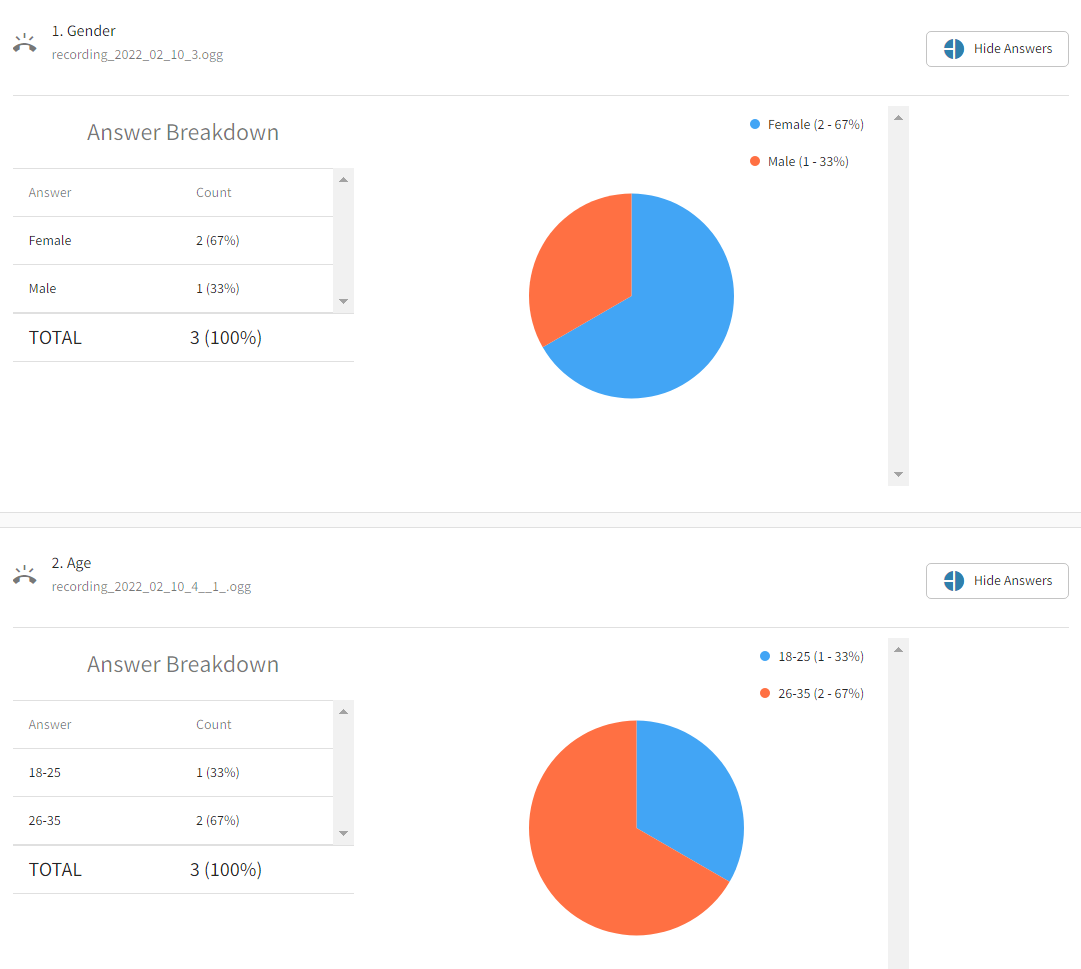 If you don’t know your participants’ preferred language, then you’ll need to ask them to choose a language. You can set a “language selector” question as your first question in your campaign to determine which language your participants will be comfortable in.

Note: You won’t see the phrase “language selector” on the platform; it’s just a term we are using here to explain the purpose of a question you can add at the beginning of a campaign to ask the contact to select a language.

First, add the languages to the campaign, as described in the Add Languages to the Campaign section above.  Second, create an initial question to find out the respondent’s preferred language.  But, this first question should not have separate recordings (or separate messages, if an SMS survey) for each language.  Instead, it should have one recording (or one message) asking the respondent – ideally in multiple languages – to choose their preferred language, for example:

Hi, we are conducting a short survey. Please press the number 1 on your phone now to continue in English.

(The second two paragraphs are in Tagalog and Swahili, asking the respondent to press 2 for Tagalog and 3 for Swahili.)

That single recording (or first message) should be added as the default language for that first question of the survey; the other languages should be left blank.  This way, all respondents will hear or read this “language selector” question and be able to choose their preferred language.

In this “language selector” question, you should add an action to update the language in the contact profile to the language that they selected. 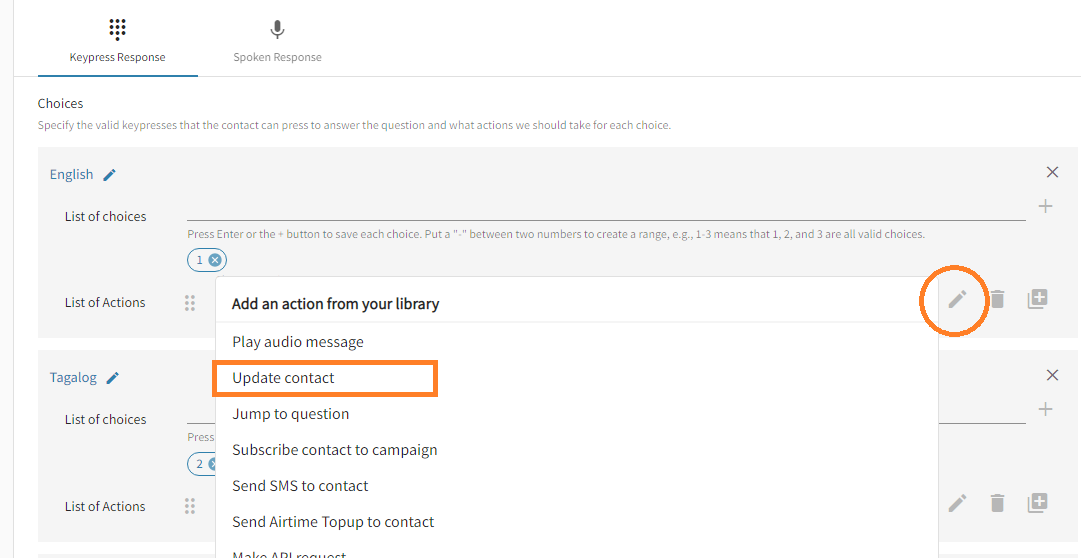 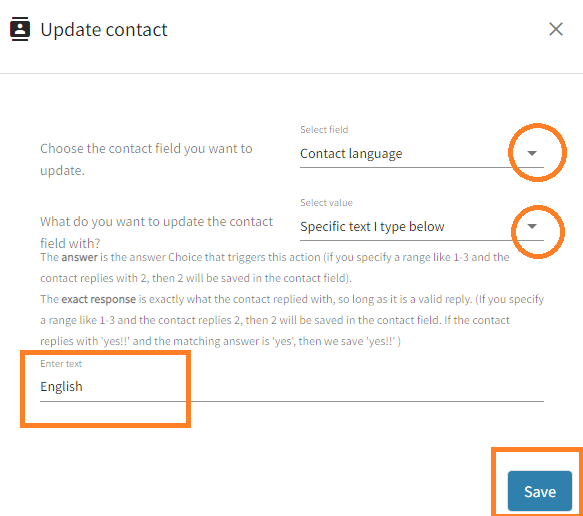 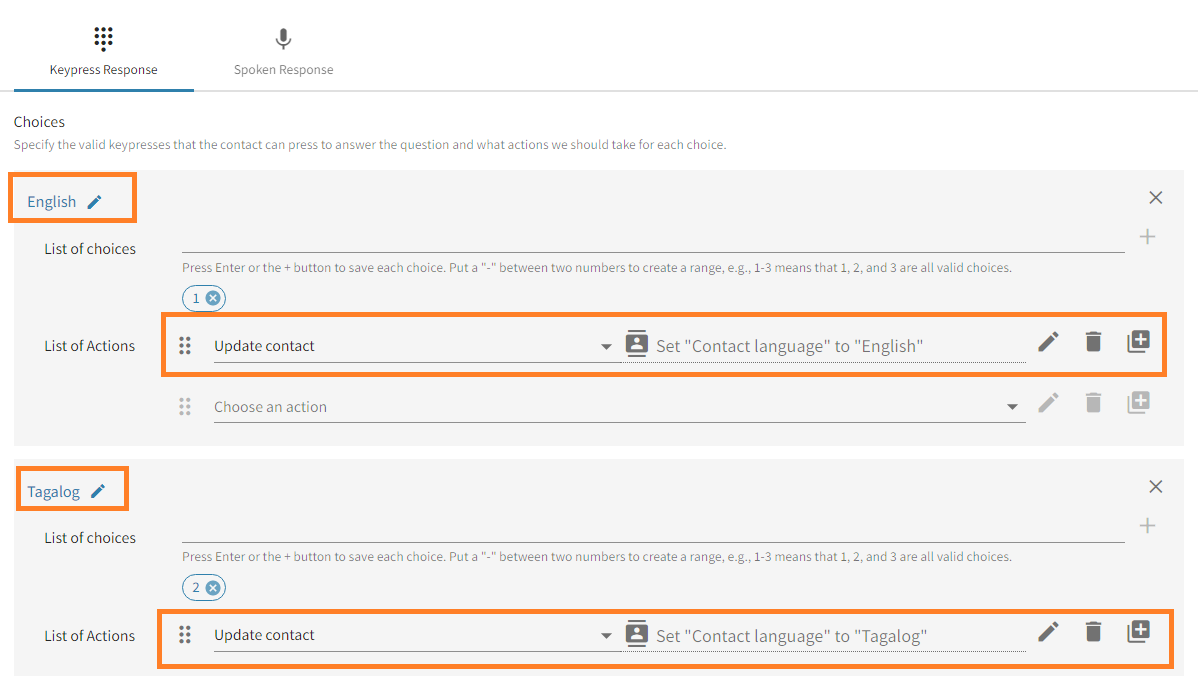 The update to the contact’s language will apply in real-time, so all future questions/messages in the campaign will use the language that the respondent selected.  After adding the “language selector” question, you can proceed in doing the same steps as in option 1 above, starting from Create Multi-Language Questions.

You Know Some Contacts’ Preferred Languages

After this, you can proceed in doing the same steps as in option 1 above starting from Create Multi-Language Questions.

Have questions or need a little extra help?