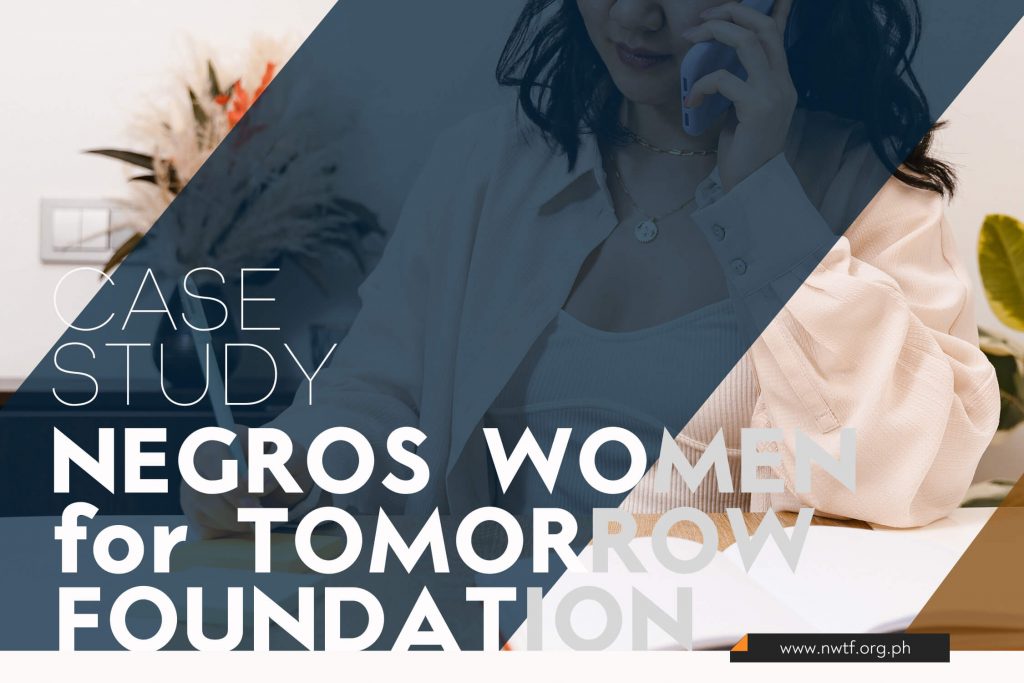 Negros Women for Tomorrow Foundation Inc. (NWTF) is one of the Philippines’ leading microfinance institutions (MFI) and is headquartered in the heart of the country – the Visayas island group. It is committed to alleviating poverty by providing micro-financing and developmental services to low-income entrepreneurs following Grameen Bank’s micro-financing methodologies.

Negros Women for Tomorrow Foundation Inc. (NWTF) is a non-profit organization dedicated to alleviating poverty by providing microfinance services to the marginalized communities in the Visayas islands of the Philippines. These groups include low-income women, micro-entrepreneurs, farmers, fisherfolk, and small to medium enterprises. NWTF ensures that 80% of its clients are below the national poverty line when they enroll in the microcredit program. To set sound alleviation targets, NWTF uses a poverty measurement tool called the Progress out of Poverty Index (PPI), which is managed by Innovations for Poverty Action (IPA).

NWTF employed the help of engageSPARK in 2016, as part of a collaboration with ideas42, to provide free financial literacy training to NWTF’s Dungganon clients in the Visayas with pre-recorded voice call blast educational messages. NWTF scheduled the voice calls to go out on a weekly basis. Participants received a call on their mobile phones in their free time and heard a 4 to 5-minute long pre-recorded message in their local language. The pre-recorded messages taught them, among other things, how to manage their finances by not co-mingling their household funds with their store funds. The calls also taught them practical lessons on how to spend their store funds wisely when shopping for new stocks for them to gain more profit. The participants had an option to listen to the previous week’s call blast if they missed it by initiating a cost-free missed call to a hotline number that then triggered an automated callback to the member’s phone.

The 2016 training was a 22-week program centered on enhancing the members’ knowledge in handling their businesses by equipping them with best practices on saving and budgeting for them to have successful businesses and enjoy better lives.

After analyzing the results of its 2016 pilot that targeted four of its branches, NWTF and ideas42 recognized the huge value of the program, as it caused a significant improvement in the business practices of the pilot participants. NWTF adapted the voice messaging training in 2018 and targeted more experienced entrepreneurs via engageSPARK’s voice call blast platform. This time, NWTF reached 4,014 of its Dungganon member clients from 8 branches in different cities in the northern part of Visayas.

The participants prefer pre-recorded call blast messages over other solutions (e.g., classroom training and sms messaging) because they can receive the calls wherever they are at certain points in time. It was convenient and cost-effective for both NWTF and Dungganon members given the high costs of setting a classroom training where they would have to hire trainers and allocate a budget for food and other allowances. Members no longer have to go far and leave their businesses and lose a day of profit to go to training centers. Thanks to the program, they received free training in the comforts of their home or business premises. Voice call blasts are also ideal for the enrolled participants because some of them are uneducated and can better understand training content when they hear it as opposed to reading instructions sent via SMS.

In the first 4 weeks of the program, a staggering 81% of the total participants answered the voice calls with 77% of them completing each of the 4-5 minute training. NWTF experienced a dramatic decline in answered calls the following month where almost half of the previous month’s success was lost. This was due to a variety of factors that included some participants changing their mobile numbers and others changing their preferred time schedule to receive the training. In addition, telco activities in certain areas may have contributed to this sudden slide in the number of answered calls. However, NWTF slowly gained back its audience in the coming weeks towards the end of the program where it ended with an impressive 75% of answered calls out of the total 4,014 enrolled participants. 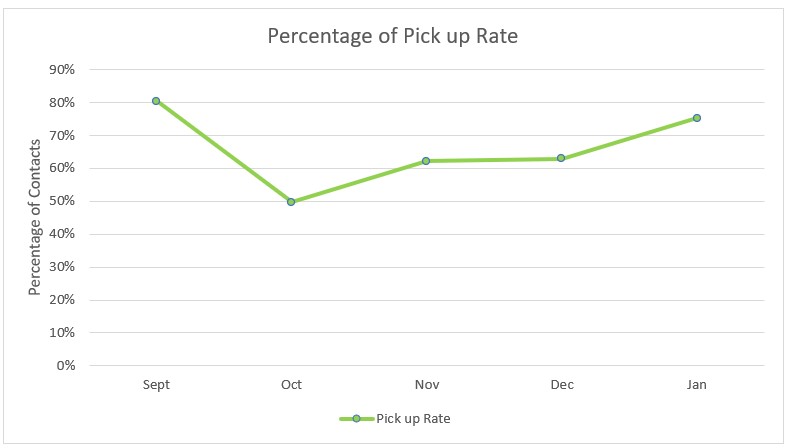 Of those who picked up the voice calls in the course of five and a half months, an average of 14% disconnected or hung up at the first minute of the call. Despite losing some of its audience, NWTF was still able to engage an average of 79% of those who answered into completing each voice call training.

Between September 2018 and January 2019, NWTF sent close to 70,000 voice calls for this financial literacy-training program. NWTF staff spent about 15 minutes each week using engageSPARK’s easy-to-use voice call blast platform to launch the scheduled calls.[1] The participants applied the lessons they heard during the weekly voice call blasts to their day-to-day business transactions. This resulted in them being able to handle their businesses better which was evident from their record keeping. One participant expressed her approval by telling the NWTF staff that the Voice Call Blast training made her “wiser and helped me handle my customers marvelously.” The practicality of the program has benefited both NWTF and Dungganon members. NWTF was able to conveniently launch pre-scheduled call blasts that go out at different times of the day each week (at the specific time requested by each participant at the beginning of the program), and participants receive free training without leaving their homes or businesses.

[1] engageSPARK’s Drip Campaign makes it easy for clients like NWTF to build and launch campaigns like this one. Instead of spending time every week launching Voice blast campaigns, organizations spend just 15 minutes on the engageSPARK platform setting up one campaign and then just sit back and relax as the engageSPARK system handles everything, calling each participant at the appropriate time for each Voice message in the campaign.